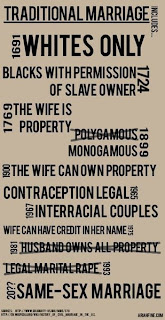 Almighty God created the races white, black, yellow, Malay and red, and He placed them on separate continents. The fact that He separated the races shows that He did not intend for the races to mix.

-- Virginia judge who refused to uphold a D.C. marriage between a white man and a black woman, 1958.

Richard and Mildred Loving, the couple in question, were banished from their home state and risked getting arrested if they ever returned. To, you know, try to see their family.

Eventually the ACLU took up their case, which in 1967 made it to the Supreme Court. The Court struck down the law against interracial marriage, which at the time was still active in sixteen states.

The book where I read about this is Elizabeth Gilbert's Committed: A Skeptic Makes Peace With Marriage. Gilbert goes on to explain:

At the time, I must also mention, a poll showed that 70 percent of Americans vehemently opposed this ruling. Let me repeat that: In recent American history, seven out of ten Americans still believed that it should be a criminal offense for people of different races to marry each other. But the courts were morally ahead of the general population on this matter... life went on, and everyone got used to the new reality, and the institution of marriage did not collapse for having had its boundaries adjusted just that tiny bit wider...

You see where I'm heading with this, right?

Or rather, you see where history is heading with this?

Gilbert brings up the issue of same-sex marriage, and quotes some right wing homophobe who brings up the lame argument that supporters of gay marriage want to change the definition of marriage. She responds:

The problem with that argument, though, is that the only thing marriage has ever done, historically and definitionally speaking, is to change. Marriage in the Western world changes with every century, adjusting itself constantly around new social standards and new notions of fairness. The Silly Putty-like malleability of the institution, in fact, is the only reason we still have the thing at all. Very few people... would accept marriage on its thirteenth-century terms. Marriage survives, in other words, precisely because it evolves.

For example, the concept of marrying for love would be completely alien to most humans in history. That one detail has changed the meaning of the institution way more than gay marriage ever possibly could. Gilbert elaborates by talking about her relationship to her fiance:

Times change. Today's 70 percent becomes tomorrow's fringe views. All the people who currently oppose gay marriage will, in future generations, be looked at the same way that we now look at the general population who were against interracial marriage in the 60's.
Posted by Tim at 7:30 PM

Where did you get that first image? It looks like a poster, and I want one for my office door!

I found it on some random page during a Google image search. After some investigation, it appears to have been created by a graphic artist named Ariah Fine: http://tumblr.tryingtofollow.com/post/60574427/traditional-marriage-a-timeline-poster-prints

This was a great post! I wish everyone would come and read it!

If you had a +1 button I would have clicked it.

no such thing as 'race'
http://www.youtube.com/watch?v=wDknzZ9b6rg

Great entry regarding the evolution of Marraige. The mere concept in which "Marraiges" are still an arranged-contractual-agreement between parents, (often) a church, or religion (in some rarer cases) in other parts of the world, and our country recognizes this arranged-Marraige as 'legal', is further-proof of the mailability of our laws. In cases where we may even suspect the "marriage" was arranged under DURESS is not an immediate disqualification of such an arrangement unless, one of the parties to this "marriage", makes it an issue with proper legal authorities in this country. Even then, I suspect, depending on which country we are talking about, we would be loathe to get involved in such matters.

This is just another Irony of Two-Women or Two-Men, pledging responsibility for one another, love for each other and the desire to have it recognized by our country, regardless if it was recognized in another; say Canada or Great Britian or...for god's sake, Spain, (one of the most Catholic Countries in the world.)
So I ask; is this IRONONIC or MORONIC?

So much logic in one little post. This should be mandatory reading for the masses--from Congressmen to high school students.

Personally i think that people is stupid... marriage ? for what, even if people is gay or not there's no point in getting married... is a waste of time, just live together if you want and make your life easier. 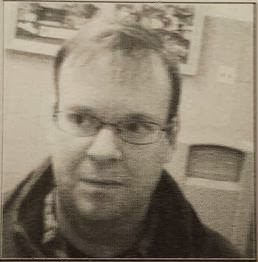